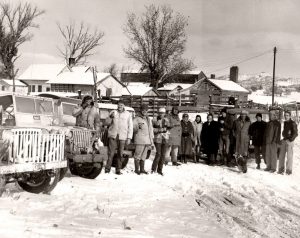 History of Prescott, Arizona and the Yavapai County Jeep Posse

In 1854, gold was discovered on Lynx and Granite Creeks in what is now central Arizona.  The word got out, the gold rush was on and settlers quickly moved in.  This came at the dismay of the Hualapai and Yavapai Indians native to the area.  That year, however, the U. S. Army established Fort Whipple near the small community which was soon to be named Prescott, after William Hickling Prescott, a noted historian. By 1864, Prescott was booming due to placer mining, which for themes part had petered out, and also due to many big mines which were producing gold and silver in the Bradshaw Mountains which lay just south of the town.

In 1863 the westernmost battle of the Civil War was fought at Picacho Peak located between Tuscon and a group of small farms in what was to become Phoenix.  The North won the pitched battle and drove the Southerners back to their home base of Tucson.  Washington, D.C. realized that in order to protect the gold fields of California from any southern invasion it was time to establish a territory, get law and order and generally make the area more civilized. The huge territory of New Mexico was split in half from north to south and the western half became Arizona. To the dismay of Tucson which was the biggest “city” in the area, President Abraham Lincoln named the small town of Prescott as the first capital of the Arizona territory.

After the Civil War, Prescott steadily grew in population, fueled by a small timber industry, and by being the Territorial capital, but mostly by the mines to the south. The “honor” of being the capital moved back and forth a couple times and finally rested with Phoenix in 1889, but Prescott remains the county seat for Yavapai County.

In 1942, Prescott came to the attention of Washington, D.C. again, this time as a good place to train pilots. The U.S. Army Air Corp lengthened the runways of Love Field, a small airfield north of town named for Ernest  Love, in order to handle the big planes, transports and bombers, necessary to train pilots, bombardiers, etc. Ernest Love was the son of  prominent Prescott family, who was shot down, (some say by the Red Baron himself) and died as a fighter pilot in World War One.  Prescott weather was very mild, even winter months are clear and warm during the days, so training could be maintained there all year around.  In summer it was cool, as a rule of thumb, 20 degrees cooler than Phoenix. 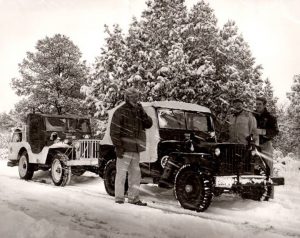 Thousands of Army boys came and went during the war and at war’s end some of them came back to live in the area.  Many of them were pilots and they quickly formed an association for flyers and soon were using planes on search and rescue missions for downed aircraft.  They used jeeps, which the Army sold by the hundreds after the war, to get to the downed planes and out of this in 1952 came the Prescott Jeep Club.  It was headquartered in an old hangar at Love Field which the club used for meetings.  The club was primarily social in nature but it worked and it didn’t take long for the local Sheriff to ask the club for help in rescuing not only downed planes and pilots but lost children from the many kid’s camps in the area, lost hunters of which there were many during hunting season, and any one else who needed help in the area.  In return for this he offered the members a deal to make the members “Special Deputy Sheriffs” when they were on a search  and rescue mission. Out of this evolved the Yavapai County Jeep Posse. The Posse members still proudly wear a Sheriff’s badge which says “Deputy Sheriff” on their uniforms.

Some years later the U.S. Forest Service approached the Sheriff and asked if he would “lend” the Jeep Posse to them in times of need, such as mapping and patrolling the many back country roads and in times of drought help prevent people from building fires, help supply fire fighters with food and water when a wild fire got started and in general do whatever the Forest Service asked for. The Sheriff agreed and out of this the Jeep Posse began a fire evacuation process to warn people living in the many high-density pine and juniper tree communities that ring the city that danger was near.  During the Indian Creek fire of 2002 the Posse was called out and evacuated two of the local communities that were endangered by the wildfire. The fire did burn in to one of them and destroyed homes. With the help of the county Office of Emergency Services the Posse also has developed a fire evacuation process for the kid’s summer camps.

Today the Posse is composed of approximately fifty all-volunteer men and women who are highly trained in navigation using GPS and map reading, radio use, back-country driving, first aid and CPR.  They travel in two-person units as a driver and an observer in a four wheel drive vehicle, now mostly SUV’s, to rescue a number of people each year who get lost and/or have vehicle break downs due to the ruggedness of the area. These comprise mostly hunters, hikers and “city folk” that come up onto the Colorado Plateau from Phoenix and other urban areas to explore and hike the many back roads and trails of the mountains.  During a “callout” the Posse units are controlled, monitored and assigned duties from “base camp” by the Incident Commander through two Vehicles, the Sheriff’s Mobile Command Post and the Posse’s four wheel drive Command and Communications Vehicle. These two vehicles, staffed by the Jeep Posse’s trained Communications Squad members, provide a total communication system that can talk to all police and U.S. Forest Service dispatchers, helicopters and Air Posse units, Posse mobile units, search dog, horse and back-country teams involved in a search or rescue. Thanks to GPS (Global Position Satellite) units the Incident Commander knows at all times where every team involved in a search is located.

The old hanger has long since been abandoned. The Posse now meets monthly and holds training sessions in a new facility which the Posse members built from a double wide engineer’s trailer donated by a local utility on two acres of land given to the Posse by the county. Each member, while a volunteer, maintains their equipment and updates their knowledge to be ready to assist the Sheriff’s office wherever and whenever they are called upon.